Last year Momma threw an attention-grabbing party for my first birthday (complete with handouts of my new business cards) in high hopes of upping my Blog readership and snagging advertisers.  Like most of Momma’s little schemes, however, it didn’t work and she put her Blog push on the back burner.

Consequently, my birthday this year was not a big deal to her.  In fact, she almost forgot about it altogether.  She only remembered when her friend – and my legal counsel – Uncle Chuck, handed her a gift bag for me.  Momma, momentarily caught off guard, quickly recovered and said cooly, “Oh yes, of course, Lina’s 2nd birthday is coming up – I’ll give this to her.”  Awkward.

Momma was also reminded of my birthday when Nanny showed up with a snazzy new collar and handcrafted scarf!  Here I am with my Jimmy Chew from Chuck’s dog, Willie and modeling my hound couture from Nanny’s family ~ 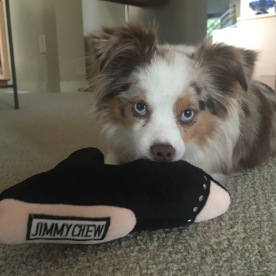 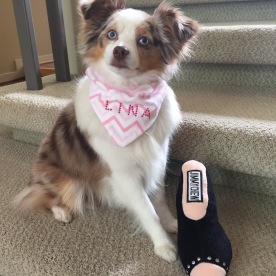 Well, this got Momma thinking – two priceless gifts- how could she top that?  Then she had a brainstorm.  She would give me the gift of time with her.  The next day she announced to me, “Lina, I am going to stay home with you all day on your birthday.  And we’ll even go to Chuck & Don’s and pick out a nice present.”  (Now that I think about it, I’m surprised she hasn’t embarrassed me by hitting them up for advertising.)

The day at home with Momma didn’t exactly end up being the quality time I had envisioned.  In fact, she had decided that as long as she was going to be stuck at home with me all day, she would go a little Martha Stewart and can some salsa.  (A friend had given her a bunch of tomatoes and peppers and she would take advantage of the free food.)

It may go without woofing, but the canning did not go exactly according to plan.  (My first clue that trouble might be a-paw was when I saw her Google “How to can salsa.”)  It was no surprise then that there were a few mishaps along the way, including the broken jar in the water bath incident.  At least neither of us was injured.  Unfortunately though, the finished product looked more like tomato broth than salsa. How anyone could scoop it up with a chip was beyond me.  That didn’t faze Momma, however – she would pass it off to relatives as Christmas presents.

When Momma finally finished making salsa, she took me to Chuck and Don’s to find a gift.  I know it sounds a tad ungrateful to say that she grabbed the first thing she saw, but it wouldn’t be far from the truth.  It seems the salsa production had taken about 4 hours longer than it should have and cut into my shopping time. Anyway here’s my new ball~ 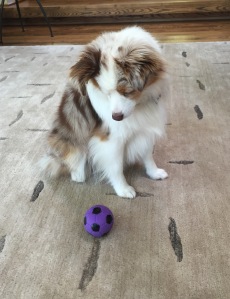 On a brighter note, Nanny also remembered my birthday with a doggie e-card.  I’m really diggin’ it as you can tell ~

Thanks to everyone who made my birthday special!

Lina, Ready To Em “bark” On Another Exciting Year With Momma