The other day Momma was all aTwitter.  She had just heard that there was a device available that enabled dogs to Tweet.  This was exciting news to her.  Maybe it would be a new way to raise my profile (in other words exploit me) for marketing purposes.  She would buy the device and get me to “Tweet” about my Blog – and thus increase my readership (and her chance to make money off me).  It sounded almost too good to be true.

Momma did a quick search and found the puppy tweeting device online.  The maker claimed that she would be able to get Tweets from her dog and that the device would work with Twitter.  This was going to be a real breakthrough for us – now all she had to do was set up a Twitter account.  Then (she quickly realized) she would also be able to get the news from Trump firstpaw!

When the package arrived, Momma eagerly ripped it open.  There were photos of dogs asking for sparkling water in their dish and complaining (in a supposedly funny way) that it was hard to Tweet when one is all paws.  (“Apparently none of them have blogs, Lina,” Momma commented drolly.)

The messaging on the box also indicated that Momma could find out what I was doing when she was away and proclaimed – “Tweets are the new bark!”  Momma couldn’t wait to get going on this – she did not want to be left behind the times.  It was not going to complicated – the device had only two parts – a tag and a Dongle.  Momma would figure out what a Dongle was later. 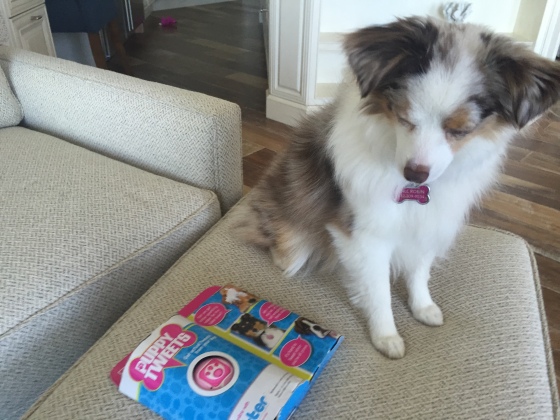 Setting up the Twitter account was not quite the cakewalk Momma thought it would be. First there were the pesky photo and profile steps – both of which she finally skipped. Then she was required to pick some interests.  This was also a challenge because the list was mindbogglingly long, and there were several sub-categories she had never heard of.  She finally (carelessly) ticked off a few items of interest – just so she could get the account set up and get to the part where she would Tweet “with” Trump (and me too, presumably).

After activating her account, Momma was inundated with strange messages and images – from people whose names and faces she did not recognize and did not want to hear from.  She was, she realized, a little over her skis with this Twitter stuff.  Nevertheless the train had left the station and Twitter informed her that she was now following 60 Tweeters.  Oh well – she would eventually figure out how to unfollow everyone except Trump and me.

First, though, she had to get me “hooked up” to her account.  She carefully plugged the Dongle into the back of the computer, inserted the  battery in the (too large for me) tag and clipped it onto my collar.

Not surprisingly, nothing happened.

Not one to give up easily (even when one should), Momma asked her IT guy, Gregg, if he would stop by and help her with an issue she was having on her computer.   Luckily Gregg was a patient person and, since he was still working with Momma, apparently no question or task was too idiotic for him.

Momma explained that she had purchased a little device that would permit her dog, Lina, to Tweet via Momma’s computer.  She showed him the little pink tag and Dongle and informed him that it did not work.  Momma further explained that she may have put the battery in backwards or plugged the Dongle in the wrong spot on the computer.  (I’m pretty sure that I saw Gregg roll his eyes at this point – it seems his patience may have run a little thin at last.)

Nevertheless, he delved in.  First he opened the pink tag to verify that Momma

had installed the battery correctly (she had!).

Next he plugged the Dongle into one of the computer USB ports, but quickly realized that the software for the program was missing.  He also realized there were no download instructions.

The Tweet installation project had gone on so long by this time that I needed a potty break. When we came back inside, Momma found Gregg on the phone with a representative from the toy maker.

Gregg going through the motions for Momma . . .

After asking Momma some questions about her purchase, the rep explained that there were no download instructions because the item had been discontinued six years ago (in 2010 to be precise).

At this point, I could tell that Gregg was anxious to bring things to a conclusion – and probably to forget that he was ever a part of this ridiculous doggie tweeting thing.  He quickly walked Momma through the process of getting her $11.00 (yes, $11.00) refund and left.  Turns out, it really was to good to be true.

So – much to Momma’s dismay – I will not be Tweeting anytime soon.  Unfortunately (but much to her delight!) Trump will.