Momma and I had just gotten home from Florida when she started to prepare for yet another trip across the pond.  This one, with her friend Donna, was to be the trip of a lifetime – she was going to play golf there – hopefully even on the Old Course!  (“Imagine that, Lina:  the history, the majesty, the scenery – the caddies!”)  They hadn’t been picked in the lottery, but still had a contact (Kevin – a great Scot!) who was going to try get them on through the daily ballot.

That plan in place, Momma turned to her usual frenetic trip preparation.  This meant shopping, back-to-back maintenance appointments and golfing (“I have to, Lina – I’ve got to get my handicap down for the Old Course”).  For me it meant a quick trip with Momma to Chuck and Don’s for dog food (“so at least you won’t have that to carp about on your blog, Lina”), being dumped off at Camp Bow Wow and generally fending for myself as Momma scurried about getting ready for the trip.

In fact, it seems Momma was so busy preparing, practicing and packing that she got a little overwhelmed.  One night as we were dragging ourselves to bed, “dog tired” after a grueling day of prep, Momma hurriedly set our alarm system.  About a half hour later the doorbell rang, but Momma chose to ignore it.  (“It’s just our daily delivery from Amazon, Lina. Forget about it.”)  I didn’t know Amazon delivered after dark, but whatever.

A little while later our house phone rang.  Since that phone rarely rings  and it’s almost always some Republican group asking for money, she also ignored the call.  Momma went back to reading her Rick Steves’ book on Scotland, and I went back to sleep.  It turns out it had been an important phone call.

A few minutes later the back door flew open and the house was filled with an ear-splitting (especially for me!) siren.  Momma, close to a heart attack, flew out of bed, yelling “Who’s there?!?!”

I meanwhile cowered on the bed, almost having my own heart attack.  (I mean, really – does this happen to other dogs?)  I was in a panic and my mind began to race.  Could this be the raid by ICE that I had feared??  Was this part of the new Trump roundup plan? Was I being deported to Australia?  Was our house really not the safe sanctuary I thought it was?

In any case, it was not me the police had come about – it seems Momma had inadvertently plugged in our distress code rather than our arming code.  (Momma, predictably:  “It was an innocent mistake, Lina – I’ve had a concussion, remember?”)

The police, wanting to make sure Momma was not being held hostage, asked her to come out into the garage so they could question her.  How they never picked up on the fact that it was me who was in distress (do they not recognize PTSD when they see it?) and being held hostage, I’ll never know.  Even so, I gave them a few face licks – you never know when you need law enforcement on your side – especially at our house.

A few days later Momma was off and, as usual, I was placed in the capable hands of Dr. Becca and Nanny Becky.  Dr. Becca brought Winnie with her so I was in good company. We had a fun and relaxing time.  And guess what – it was not necessary for the cops to storm our house even once when Momma was gone.  Here we are helping Dr. Becca at work, waiting for treats and ready for bed! 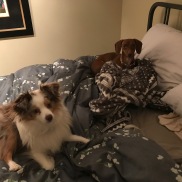 Momma was by now in St. Andrews and gearing up for golf.  This, of course, meant checking out all the golf shops and the local pubs.  Also, she and Donna had just learned that they had been picked for the Old Course(!) so they decided to go down and check it out.

By sheer coincidence, Uncle Chuck and a group of fellow Minnesotans were in St. Andrews for golf the same week as Donna and Momma. They invited the girls to join them for drinks at Dunvegans later that day and they drank a toast to Chuck’s birthday!  Oh, and Momma temporarily held them hostage for a photo ~ 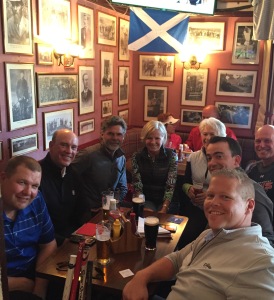 The next day Donna and Momma arrived at the course nice and early so they could “practice.”  Here they are posing and socializing and cranking up the Garmin ~ 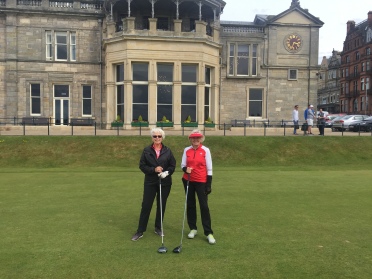 Now that the time had come, Momma was a little nervous – especially about the caddie. What if she didn’t play well?  What if he didn’t even pretend she was playing well? Would he allow her to take a mulligan if she ended up in one of those horrendous bunkers?  Advise her about dog legs?  (Okay – I just made that one up.)  Oh well, she thought, he had better be nice to her if he wanted any kind of tip at all. (Editor’s Note:  I don’t think Momma’s tip would be a big incentive to anyone.  Just woofin’.)

Upon meeting her caddie whose name was Brian, Momma – getting a little bolder now – asked a probing question designed to elicit information about his experience as a caddie. In response, he took a swing with one of her clubs using the wrong end.  (I could get to like this guy!)

Momma was pretty sure he was joking, but decided she would take his advice with a grain of sand . . . er, salt.  In fact after a good first hole, Momma grew bolder still and decided maybe she would rely on her own instincts.  On the next hole, when Momma wondered out loud whether her putt was really downhill as Brian had informed her, he fired back with, “yes, ma’am, it’s been downhill for 200 years.”  Momma, who recognized a “dig” when she heard one, blamed him for everything that went wrong for the rest of the round.

After a little too much questioning, second guessing and badgering (“Do you want to give me a tip on this putt, Brian, or should I just wing it?”), he took off his vest and started walking off the course.  Momma, in a mild state of panic – would she be the first person to have driven her caddie off the Old Course?? – quickly backed off and started to be a little nicer.  (Plus, by now she had decided that he was kinda cute.)  She didn’t even mention tip for the next few holes.

Finally they arrived at the infamous Hell Bunker on fourteen.  Here’s Brian posing and no doubt thanking God that they were nearing the end of the round ~

and here’s Momma in the big bunker.

She claims she was also just posing and never hit into it, but I’m not buying it.

By the way, Donna and her caddie, Malcolm, got along famously.  She treated him with respect and he in turn gave her golf tips, selected clubs and even cleaned her ball and placed it on the putting surface just so.  (Momma was quick to point this out to Brian, of course.) Here they are taking turns posing on Swilken Bridge on eighteen. 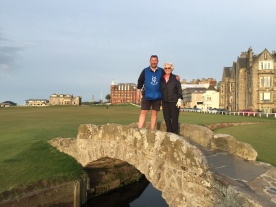 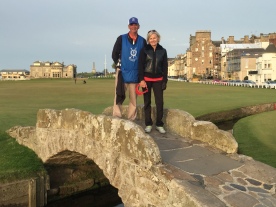 Momma says the rest of the trip (Oban, Mull and Iona Islands, and Edinburgh) was great,  but if she returns to Scotland, it’ll be to play golf at the Old Course.  I better give Brian a heads up.  Fore!

Lina, Still Hoping for a Mulligan in the Game of Life

5 thoughts on “Momma Goes To Scotland”