Will you be my Valentine?

Happy Valentine’s Day from sunny Florida!  Momma and I are now about half-way through our winter stay and things have settled down nicely – one might woof miraculously.  I have not been to see the vet in about two weeks (see “More Doggie Drama,” February 1, 2016) and Momma has stopped worrying about the authorities closing in on her, although one of her “friends” – CoCoa’s momma to be specific – threatened to turn her into the ASPCA.  (Momma chose to ignore her though – saying she is just some liberal activist.)

My time with Grace is going spectacularly well.  We play all the time – in fact, I basically live with Gracie and her family now.  Even though Momma has good intentions about having Gracie over to play, I’d say the hound hosting tally is about 50 to 1 in Anne’s favor.

In Momma’s defense, though, I don’t think Anne quite trusts Momma to care for two dogs on her own (and who can  blame her – see the aforementioned post, “More Doggie Drama” – in fact, see all previous posts).  The first time she left Gracie with us, Anne hesitated at the door and nervously asked, “Are you sure I can leave Gracie?  Will you be okay?”  Momma said “sure,” then let us run wild and returned to online shopping – I’m not going to say for what or whom.  Here I am getting the upper paw with Gracie for my beloved Lamb Chop: 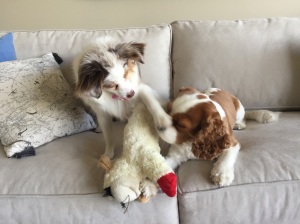 Don’t tell Anne, but after a few minutes of our raucous play, Momma was seriously considering drugging us with a few of the “calming aid” treats she has on hand.

(When) Will I Become a Stroller Dog?

The other day Momma wanted to go to an art/craft show in Ft. Myers and as a special treat decided to take me along.  This was our first outing of this sort, but how hard could it be?  She would just put me in my harness and have me heel smartly at her side, maybe visiting with a few dogs as we went.  Plus, she had her cousin Janet along to help (actually this was key and I’m sure influenced her decision – I’m just woofing…).

Things didn’t go exactly according to plan, however.  I was quickly overwhelmed by the noise, the smells, the foot (and paw) traffic and the hot weather.  Pretty soon I was panting and dragging so Momma decided she better carry me.  That lasted only until we reached the nearest wine stand at which point she handed me off to Janet.  After that, they continued to pass me back and forth, but I was getting heavy – I was way past being the tiny accessory dog Momma had dreamed of when she purchased me.

By now, Momma was frazzled and started eyeing women pushing dog strollers with envy.  (She had always viewed these  people as crazy and often proclaimed, “I’m never going to be that woman, Lina.”)  Today, however, Momma was reconsidering.  It seemed every second  doggie momma was pushing Fido along in a comfortable pram with a mesh top for good air flow and a great view.  More important, the owners were free to visit, eat, drink and browse the show unencumbered.

Finally, Momma couldn’t take it any longer and started asking people if she could buy their strollers.  When that failed (and people began to avoid her), Momma began looking around for a doggie stroller kiosk – why had no one ever thought of selling those at one of these stupid shows???

Luckily for all of us, we got rained out and had to leave early.  Unluckily for me, I may be the pet of a crazy person after all.  I just hope there’s room for Gracie!