So a woman walks into a bookstore . . . and she hoodwinks the manager into promoting Lina Unleashed!  (No joke.)  Read on.  Today Momma decided to run to the Barnes & Noble in Burnsville to buy some conservative audio book – probably by Bill O’Reilly or the like – and she noticed the place was virtually crawling with people.  Momma quickly realized that she was missing a huge opportunity by not having my book featured at the store.  As a matter of fact, she had to admit she didn’t even know if it was in the store.

Forgetting all about her shopping, Momma immediately started looking around for someone to help her, and soon spotted a young man with a lanyard around his neck.  As she approached him, she surreptitiously glanced at his name tag and saw that he was actually Brett, the Store Manager!  Well, wasn’t this her lucky day?  Momma realized she had better be nice and politely asked him where the doggie books were.

Brett first showed her an endcap entitled “Dog Tales” (Momma thought “Dog Tails” would have been more clever but kept her opinion to herself for once), which was brimming with dog books, but not Lina Unleashed.  Then Brett took her to the much larger actual “dog” section, which also did not include Lina Unleashed.  When she told him that she was looking for a book that her dog had written, Brett took a closer look at Momma, probably wondering how he could get away from her, but nevertheless asked the name and said he would look it up.

Amazingly, Brett found it and said, “Oh yes, we have that book, but it’s in the humor section.”  Momma, overjoyed by now, responded, “Well that makes sense, the book is hilarious!”  Brett then walked her over to that area, found the books (five of them!) and asked her if she wanted to sign them.  Momma said that would be great, but decided to push her luck and suggested that the books be moved to the Dog Tales endcap where it would get more attention – considering her dog was a local author from Burnsville and all.

Again, amazingly, Brett agreed.  Am I the only one thinking he was willing to do just about anything at this point just to get rid of her?  That deal sealed, Momma turned to the book signing.  She said that she was authorized to sign (“pawdograph, really,” she explained) the books in my absence, but needed to go to her car to get the paw stamp that she carried with her everywhere.  Apparently, Brett was the nicest guy in the world because he went along with her little charade, and even explained where to put the  “autographed copy” sticker on the book.

Momma left the store on cloud nine – Lina Unleashed was now prominently displayed on a desirable endcap near the front of the store with the rest of the popular dog books where it belonged.  (“It’s a dog-eat-dog world out there, Lina, you’ve got to make your own luck!”) 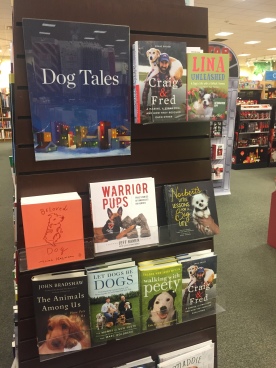 6 thoughts on “Momma Works It”