The word (woof) is out, folks.  According to a recent article on Vox Media, “When a dog breed becomes a trend – Mini Australian Shepherds are the dogs of the moment,” Mini Aussies are rapidly becoming one of the most popular dogs on the planet.  And Momma is almost out of her mind with joy and pride!   “I knew it was only a matter of time, Lina!” “And I picked you, Lina.”  “It just proves how cute and smart and athletic you Aussies are, Lina.”  “We are trailblazers, Lina!”  And so on.

Momma would never admit this, but I know how she felt for awhile after she got me.  Did she screw up (again) in selecting such an unusual dog?  Was I a true Aussie or a mix as some of her friends thought?  Would I stay small?  Was I healthy or did all that breeding down in size make me fragile?  Dim witted?  Two of her friends had gotten Cavalier King Charles Spaniel pups (such a pompous name – just woofin’) and that breed seemed to be the “dog of the moment.”  Even Uncle Chuck had one.

But now she felt vindicated.  She chose the dog that was becoming all the rage.  She was the actual trendsetter.

I am really not surprised about this news.   Momma and I (or one of my many caregivers and I) cannot go anywhere without people constantly stopping and asking us what kind of dog I am.  Momma, biting her tongue so she doesn’t say Democrat, patiently responds that I am a Toy Australian Shepherd.  Or Toy Aussie.  She used to say Tossie to be clever, but nobody knew what she was talking about so she quit.  Then more often than not (after I have given them a dose of my famous face licks), they proclaim that I might be the cutest dog they’ve ever seen.  So, at the risk of sounding like Momma, my only questions is, what took so long?  We already know of a man in our building in Florida who, after experiencing me, purchased two Toy Aussies from our breeder – http://www.bluehorizontinyaussies.com.

The Vox article is really quite informative.  The author, Eliza Brooke, explains that unlike some dogs, we little Aussies have not gained popularity by appearing in a movie like 101 Dalmatians, but rather based on factors such as our “winning personality and looks.”  Woofda!

One of the other factors in our rapid rise in popularity, explains Brooke, has to do with our size.  We are small enough for apartment dwellers and a good fit for people who travel a lot.  In fact, small dogs overtook medium and large dogs in popularity in 2008, according to the Washington Post.  Mini Aussies, who first appeared on the American Kennel Club’s “Most Popular Breeds” list in 2016, were number 34 in 2018.  Also, our popularity was bolstered when the AKC recognized the Miniature American Shepherd Club of the USA (founded in 1990) in 2015.

Another eyeopener in the article was that dogs like me are referred to interchangeably as Miniature (or Toy) American or Australian Shepherds, depending on the registry.  The AKC refers to the standard-sized dogs as Australian Shepherds and we smaller versions as “Miniature American Shepherds.”  Who knew – maybe I don’t have to worry about Trump’s draconian deportation policies after all.

You can read the entire article at (https://apple.news/ApzSSIQLtQLqFfeYJrQyT9w).

One final thing.  Momma, always looking for more exposure, saw a bunch of small Aussie Instagram photos in the article and realized just how influential that site is.  Although we already have an Instagram account – or two – she doesn’t really know how to use them.  As soon as she figures it out, though, she intends to get the word (images) out to Vox and others of the “original” popular Toy Aussie with the blog and the books! 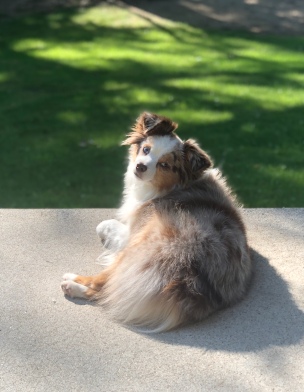