I am continuing to embark on a new chapter in my life (and maybe one for my next book)!  Momma has enrolled me in Ruffgers Dog University in Naples for agility training.  As many of you know, I had already done some awesome training with Sara of “Adventure is Barking” in Minni, but when Momma heard of Ruffgers (don’t you just love the name?), she couldn’t drive me up to Naples fast enough.  It seems she still has dreams of me with that blue ribbon — or at least on a stage somewhere.  Here I am on my first day.

We got off to a mind-blowing start at Ruffgers when, right after we walked in for the first time, another smallish Aussie who looked uncannily like me, came in right behind us.  It turns out the Aussie, whose name is Rye, is also from Blue Horizon Tiny Aussies Kennel in Sarasota and was also born in August of 2014, but two weeks earlier than me.  Momma, thinking this through — and I could see the wheels turning — realized that we couldn’t be full brother and sister (unless the mother had a very unusual pregnancy), but we could be half siblings.  Here we are posing with Rye and his momma, Mary.  What do you think?

No sooner had Momma gotten over the thrill of meeting one of my relatives than she started feeling a little resentful towards Rye.  He seemed to be the star of Ruffgers — not only was his picture prominently displayed on the wall and on the counter, but he was also featured in the school brochure. 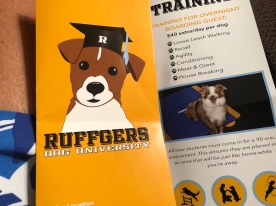 Well, Momma would have to go to work on that, wouldn’t she?  Shouldn’t a dog with a blog and two books under her collar be featured here?  Perhaps she would just ask Ashley, the owner, where the Ruffger’s library is (“it is a school after all, Lina!”) and suggest that they stock it with Lina Unleashed and Sit Stay Pray.  I just hope we don’t end up in the principal’s office over this.

Somehow I managed to tamp down Momma’s expectations and redirect her attention to the training at paw.  I have now had several lessons with Ashley and Gigi and love my training — especially since I am constantly rewarded with treats!  Sometimes I throw in a “speak” just to get a little extra.

Here I am showing off my skills with Ashley at my session last Thursday.

Momma has predictably already asked where the nearest competitions are and how we can get involved.  I just keep my head down and train.  Actually, I wouldn’t mind seeing a blue ribbon either.

One thought on “Off to University”