Well, Momma finally got her way.  I have now been a (reluctant) passenger on both her kayak and stand-up paddleboard (SUP). 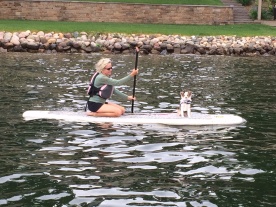 Credit to neighbor Cindy for the SUP photo.  Momma spotted her boating and taking family photos and “barged” right in.

Note that I have a look of extreme concern on my squinty little face (she keeps promising me Doggles – doggie sunglasses – but must be waiting for the fall sale).

Momma’s plan to get to know people on the lake with me along has been met with limited success.  (I don’t know when she’ll realize that most people just don’t view a boat ride as a chance to visit with her.)  In fact, fishermen – who want it quiet – usually ignore Momma in an effort to shut her up when she calls out, “How’s fishing?”  One of them did put a scare in her the other day, however, when he informed Momma that she better watch out so a big muskie didn’t get me.  I, on the other paw, was somewhat relieved – maybe I wouldn’t have to go in the water after all!

Last week we had a play date with Rachel’s dog, CoCoa.  Despite gale force winds, Momma was determined to paddleboard over (we could have walked – Rachel only lives a block away) and announced, “We are going by sea!”  Momma used me as ballast on the front of the board which was tough duty because the waves kept crashing over me.  When we somehow blew ashore at Rachel’s about an hour later, CoCoa was waiting!  We had a great time chasing each other around and eating dead fish.

Soon, though, it was time to go home and Momma, still in full nautical mode, proclaimed (as though she were the ancient mariner), “Time to set sail, Lina!”  The wind had calmed considerably, there were no other boaters around to make fun of us and we made it home above board.  Don’t tell Momma, but I could get used to this! 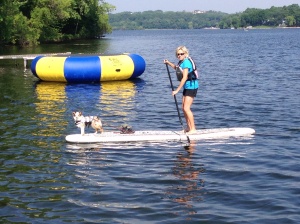